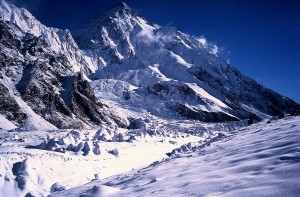 “I think it’s a leg bone and a hip joint,” I said to Rozi Ali, my Baltistani guide, while pointing at my own leg for emphasis. It was the fourth body (or parts of a body) of a dead climber that we had seen in the same number of weeks at K2 base camp. It reminded all of us that climbing the world’s second tallest mountain had consequences if things went wrong.

Even if you do everything right, you can have the misfortune of being in the wrong place at the wrong time. Like the three Korean climbers this summer who were caught in the path of an avalanche and killed. Or the three members of an international team who were trapped in the fury of an ice storm at 25,000 feet and simply disappeared. On K2, the penalty for a mistake—or just plain bad luck—was always the same. We had the body count to prove it.

This year was the 50th Anniversary of the first ascent of K2. The Italians had done it first in 1954. This summer they returned in force to prove once again that this was their mountain. I had decided years ago that I was going to be with them when they tried. I climbed my first mountain in the Swiss Alps when I was 13 years old. I knew then that I loved the adventure of alpine mountaineering and I’ve bounced around the U.S., Europe, Africa, Mexico, and now Pakistan humping gear ever since. Seeing K2 this summer with my own eyes was a dream come true. 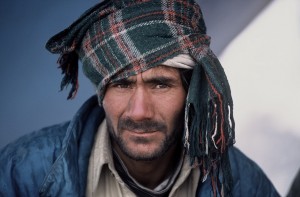 The face of a sherpas from the Hunza Valley reveals the harshness of life in the altitude of K2. 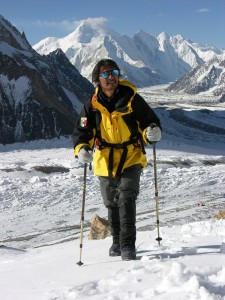 On a day climb along the “Magic Line” route on K2 with base camp in the distance below and to the right.