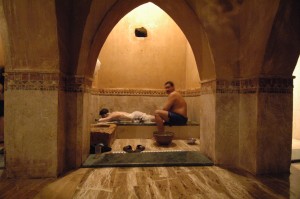 “First time?” asked Nbil with a broad smile as I walked through the doors of the Al Pasha Turkish Bath.

“Yes!” I exclaimed, delighted that even after all of my years of world travel, when you look hard enough there are still first times.

The Al Pasha is perched atop one of the oldest of the nine hills that now comprise Amman, Jordan. This thoroughly modern Middle Eastern city of 5 million residents, boasts every conceivable amenity: shopping malls and art museums; beauty parlors and Starbucks Coffee Shops; Coke-a-Cola and Burger Kings. Still, Amman has not abandoned a past that reaches back more than a thousand years before Christ was born.

Hammams like Al Pasha are living cultural treasures. The word hammam derives from the Arabic word hmm for “heat.” The public bathhouse is not an idea original to the Arabian plateau. It began with the Greeks. The Romans expanded on the concept adding libraries and gymnasia. For the Romans, the bathhouse became the center for social interaction; a place where politics, social issues and family matters might be addressed. But the Ottoman Turks took a good idea and made it better. They merged art and architecture with leisure and religion and made the Turkish bath an integral part of the Middle Eastern social order.