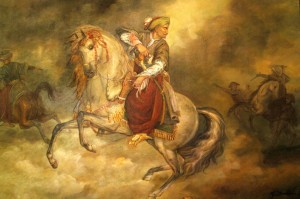 “They are the daughters of the wind,” says Said Huneidi as he relates the Bedouin creation myth of the Arabian horse. He removes his glasses and leans forward to emphasize a point, “The legend is that a fierce wind came from the south storming across the land and from this heat and swirling sand, the Arabian horse was born.” He pauses for a moment, “Because of this birth they are able to run faster than the wind itself.”