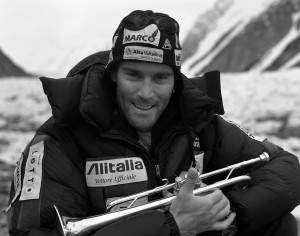 Marco Confortola humped his trumpet up to 17,400 feet.

One night, unexpectedly, and after most of the climbers at the K2 base camp were already in their tents, he began to play.

For three months, I, like Marco and the members of his Italian expedition, had chosen to live in a tent in the shadow of the world’s second tallest mountain. At night it was -30C or -40C or -50C. The number didn’t matter then and it doesn’t now. What did matter was that on more than one occasion I heard Marco’s trumpet emerging out of the aching silence in a place rendered barren by meager oxygen and icy cold.

He played a melody I couldn’t identify but I loved it still. The song had the kind of long and somber notes that made Miles Davis a legend. It made me feel, however fleeting, as if I were home in my soft, warm bed instead of sleeping on an 11,000-year-old ice skating rink known as the K2 glacier. It was a moment Marco created for all of us who had come so far from so many different places.

I strained to hear more. But at base camp, I was living as if I were in the Pliocene ice age, the earth’s last great glacial era. I really didn’t want to unzip my sleeping bag and risk releasing my body heat. I did manage, however, to wrench my head from the hood of my bag to hear the music more clearly. Marco’s trumpet saved all of us that night. It redeemed us from the vast, frozen, emptiness of the western Himalayas perched at the intersection of Pakistan, China and India.