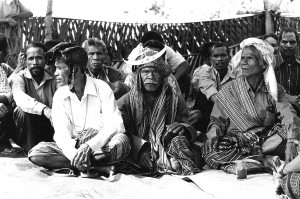 In Dili, East Timor, my morning cup of coffee was always robust and aromatic. And unnerving. It wasn’t the java. It was the group of guys sitting around me bearing holstered 45-caliber side arms and slung F88 Steyrs.

Even if the soldiers sported U.N. fashion-forward, baby blue baseball caps, it was still disconcerting to see all of those gun muzzles while wiping sleep from my eyes. And now that I think about it, the possibility of someone popping-a-cap-in-my-ass later in the day wasn’t such a hot idea either. Accessorizing with guns, while acceptable in war-zones, is considered gauche in my Nuuanu neighborhood back in Honolulu, Hawaii.

Maybe this sounds overly simplistic but even if these were the good guys, people armed with guns are still people armed with guns. All that steel sparkling in the dawn’s light meant there were going to be lots of bullets in the air coming from lots of different directions if things went south later that day.

But unlike the guys packing heat, my only defense was to duck. Which is for a guy – under pretty much all circumstances – demeaning. And engaging in a firefight armed only with a ballpoint pen is a lot like gaming at a Vegas casino: chances were, I was gonna lose. 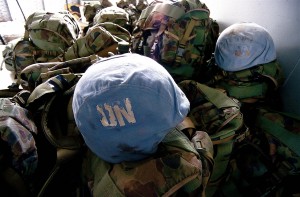