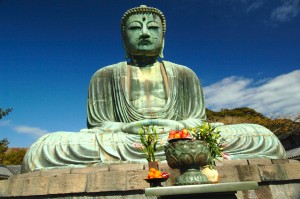 “This doesn’t look good,” my mother whispered to my Aunt Betty with concern resonating clearly in her voice. She was right. But dark alleyways in any part of the world look forbidding. Even one in Tokyo, Japan.

I am certain that Rule #1 in Tour Guide School admonishes “A Good Tour Guide Always Avoids Dark Alleys.” I knew this was not the kind of place we were supposed to end up. But then again I’m not a tour guide and these weren’t tourists; they were family. Which, on retrospect, doesn’t sound like much of a defense. But they were as much to blame as I was for being there. So the Japan with the temples and the geishas and the cherry blossoms would just have to wait until tomorrow. At that very moment everyone simply had to accept the fact that we had strayed pretty far from the travel brochure.

The night was innocent enough when it began. We had been walking along a small street just down from a hole-in-the-wall noodle shop. As we passed an opaque glass door, my mother and aunt became intrigued at the lights and sounds coming from within. I recognized it immediately: “Mom, Aunt Betty,” I began pleadingly, “I don’t think you want to go in there.” I implored, “It’s a Pachinko Parlor!”

For the uninitiated, “Pachinko” translates (roughly) into English as “a place to change dollars into regret.” But since I’m not much of a prude, I abdicated responsibility entirely and deferred instead to my mother’s age as a trump card to what little authority my tour guide status conferred. So open the doors I did. And there they stood staring delightfully albeit with confusion into a place where I had, on many earlier occasions, lost a good deal of time and … yen.

But as soon as they crossed the threshold, their eyes lit up like the lights on the hundreds of flashing pachinko machines standing side-by-side in neat, little Japanese rows. By the looks of excitement on their faces I knew then that both my mother and my Irish Aunt Betty had spent too much time together in Las Vegas. In this joint, with all of its clanging and banging and bells and twirling lights, they were no longer gaijin – strangers. They had flown westward toward the “Land of the Rising Sun” for nearly nine hours to arrive finally in (their minds) … Las Vegas. Sumimasen.