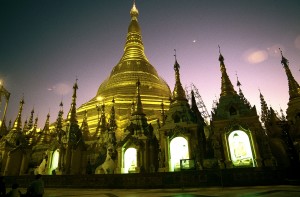 I woke up in Rangoon on my birthday.  I had promised myself some time ago that I was going to be here for just this occasion.  At my age, birthdays have become private affairs.  Although I have no problem in joining in on the revelry to celebrate someone else’s birthday, I have gone to great lengths to avoid celebrating my own.  So once a year, I need a place to hideout for a while.  This time I passed anonymously into the Year of the Horse in the arms of distant, mysterious, exotic Rangoon.

I had come to the realization that at my age, I tended to like things that were at least as old as I was.  The older things were, the less old I felt.  Some years ago, I had read about the thousand year old archaeological zone of Bagan in central Burma (nka Myanmar) in a National Geographic Magazine.  Not only did this meet my age criteria but also I would have Rangoon as a present.  So off I went.

The glory days for Rangoon may be behind it.  The year round heat and pestering humidity has thrown a veil of mildew across every building in the city.  It looks more like the decadence of Venice without the romance of the canals.  This was just one obvious consequence of the abdication of control by the British Crown since 1937.  But even in its state of decay, there is a pervasive charm.

It is impossible not to be enchanted by Rangoon.  Burmese men, preoccupied in their conversations, constantly tie and retie their longyis (sarongs) as if it were a national past time.  Two young ladies sitting at a card table manage a long line of customers waiting patiently to exchange money for use of their telephone.  Crowds of people trying to cross the chaotic streets jammed with vehicles perform a ballet to the music of car horns as Burmese drivers prefer honking to braking.  And lights flicker incessantly as instantaneous and unpredictable power outages punctuate the rhythm of the day.

And where else but in Rangoon can you buy luck?  Merchants peddle good fortune near the Buddhist shrine, Sule Pagoda.   For 100 Kyats (pronounced “chats”) bird catchers will let you release a sparrow into the Myanmar skies to insure good luck.  Instead of blowing out candles on a cake, I forked over 14 cents and let one fly.

I have always loved the name of my birthday city.  “Rangoon.”  Actually, it is now called “Yangon.”  But telling people you spent your birthday in “Rangoon” has a sexy, turn-of-the-century, British colonial ring to it.  Substitute “Yangon” in the same sentence and it sounds as if you went to a Chinese restaurant.  I am not alone in this feeling as many of the Burmese refuse to call their home by any other name than the one I prefer. 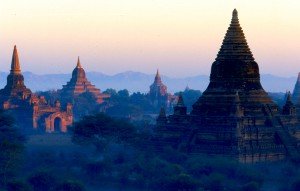 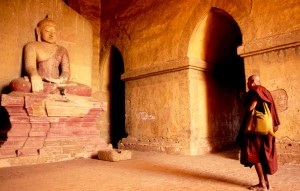 Once the Center of the Buddhist World, monks at prayer can be witnessed at nearly every shrine.