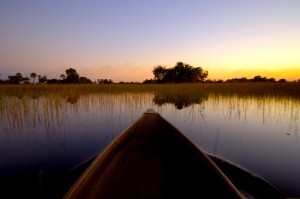 If the Kalahari Desert of Botswana Africa had an emotion it would be hate. It hates the color green. It hates hills and valleys. It hates water. It hates anything easy.

The name “Kalahari” comes from the Setswana word Kgalagadi, meaning “the great thirst.” The San – the Bushmen of this desert – accept this without question. For 30,000 years they have survived here according to rules dictated by the absence of water.

In every desert I have ever visited, the people who live there move slowly. Where is there to go? Let alone in a hurry. So when one of my Baeyae guides advised me while laughing, “There is no rushing in Africa!” he didn’t have to say it twice. He probably didn’t even have to say it once.

The official currency of Botswana is pula. It means, of course, “water.” In a parched world, nothing has more value. It is a curious counterpoint for a nation in which 85 percent of the country is as dry as burnt wheat toast.

Botswana is what is leftover when the borders of four other African nations are drawn around it: Zambia, Zimbabwe, South Africa, and Namibia. The 15% of Botswana that is not a desert has a name: the Okavango Delta. Fed by the river of the same name that flows from Angola, this lush region proves that in some parts of the world, you can even canoe in deserts.

The emptiness of the Kalahari spreads across an area roughly the size of France. In 1849 David Livingstone crossed this god-forsaken flatland on foot. Given the breadth and harshness of the featureless desert staring up at me at this very moment, I was grateful to both of the Wright brothers for the gift of flight. Travel between the three-dozen or so safari camps interspersed throughout this huge alluvial plain is by Cessna aircraft. The flights originate out of Maun in the south and fan out to the north to carry passengers into the heart the Kalahari watershed.

Bevan Brunton, an Australian ex-patriot pilot, flew our A2-A1W Centurion 1,500 feet or so above the leafless acacia and scrub for a little more than an hour once we left Maun. The ground below was chalky white as far as the eye could see but in the distance I saw the green of an oasis as we began to move back down to earth. Minutes from the landing strip at Xigera’ (pronounced Kéy•ger•a) Camp, I found myself sliding into a mokoro (Setswana for “dugout canoe”) with Baeti Samotanzi as my guide. He stood at the rear and polled us silently along with the skill of a Venetian gondolier. I draped one hand into the cool, pristine water as we wound our way through a channel of papyrus reeds. The contrast from Kalahari dust to Okavango lush in such a short time was dizzying. I felt like I was Dorothy waking up in the Land of Oz except Toto had become a hippo. 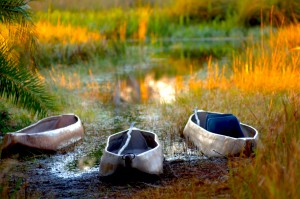 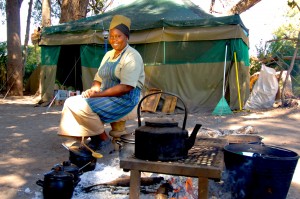 Miss Oduetse at Mokoro Camp greeted us with hot tea, cookies and a warm “Jumela!” 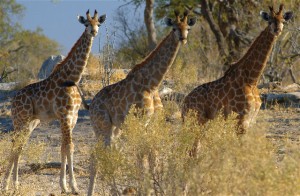 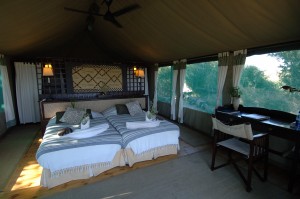 There’s camping and then there’s CAMPING!