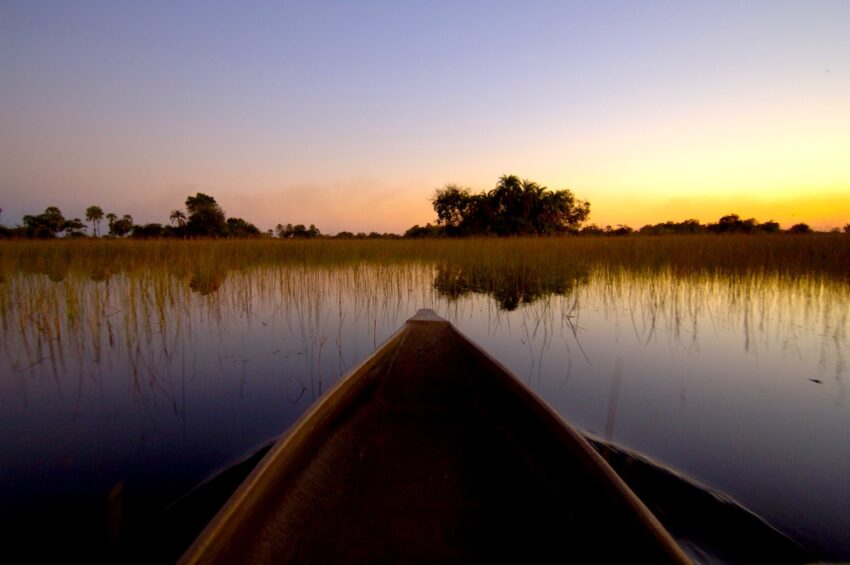 Precious Water in the Middle of the Great Thirst

If the Kalahari Desert of Botswana Africa had an emotion it would be hate. It hates the color green. It hates hills and valleys. It hates water. It hates anything easy.

The name “Kalahari” comes from the Setswana word Kgalagadi, meaning “the great thirst.” The San – the Bushmen of this desert – accept this without question. For 30,000 years they have survived here according to rules dictated by the absence of water.

In every desert I have ever visited, the people who live there move slowly. Where is there to go? Let alone in a hurry. So when one of my Baeyae guides advised me while laughing, “There is no rushing in Africa!” he didn’t have to say it twice. He probably didn’t even have to say it once.

The official currency of Botswana is pula. It means, of course, “water.” In a parched world, nothing has more value. It is a curious counterpoint for a nation in which 85 percent of the country is as dry as burnt wheat toast.

Botswana is what is leftover when the borders of four other African nations are drawn around it: Zambia, Zimbabwe, South Africa, and Namibia.  The 15% of Botswana that is not a desert has a name: the Okavango Delta. Fed by the river of the same name that flows from Angola, this lush region proves that in some parts of the world, you can even canoe in deserts.

The emptiness of the Kalahari spreads across an area roughly the size of France. In 1849 David Livingstone crossed this god-forsaken flatland on foot. Given the breadth and harshness of the featureless desert staring up at me at this very moment, I was grateful to both of the Wright brothers for the gift of flight. Travel between the three-dozen or so safari camps interspersed throughout this huge alluvial plain is by Cessna aircraft. (See accompanying story). The flights originate out of Maun in the south and fan out to the north to carry passengers into the heart the Kalahari watershed.

Bevan Brunton, an Australian ex-patriot pilot, flew our A2-A1W Centurion 1,500 feet or so above the leafless acacia and scrub for a little more than an hour once we left Maun. The ground below was chalky white as far as the eye could see but in the distance I saw the green of an oasis as we began to move back down to earth. Minutes from the landing strip at Xigera’ (pronounced Kéy•ger•a) Camp, I found myself sliding into a mokoro (Setswana for “dugout canoe”) with Baeti Samotanzi as my guide. He stood at the rear and polled us silently along with the skill of a Venetian gondolier. I draped one hand into the cool, pristine water as we wound our way through a channel of papyrus reeds. The contrast from Kalahari dust to Okavango lush in such a short time was dizzying. I felt like I was Dorothy waking up in the Land of Oz except Toto had become a hippo.

Close to 40 percent of Botswana has been set aside as private reserves or national parks. My camp at Xigera exists on a protected tract and the concentration of wildlife both large and small, is proof that the animals thrive here.

Preserving the environment, though, has a cost. In Botswana, that price is paid for in diamonds. Chances are if you are adorned by a sparkly, glass-like gemstone that takes nature nearly 3 billion years to make, you may be wearing a diamond from Botswana. It is the yin and yang of the universe at play. What Botswana lacks on its surface, it has in the treasure beneath the vast dryness.

It is a treasure in every sense of that word. Botswana exports annually, 26 million carats of diamonds worth an estimated $6+ billion USD. Although diamonds won’t quench your thirst in the Kalahari, the money they fetch can support the infrastructure to have whatever you desire to be flown across the vast desert directly to your remote location.

The tented safari camps that dot the northern Kalahari provide room and board for a single price. They are not cheap. Some cost more than $400 USD per night. A packaged tour for 10 days can easily cost $8,000 USD. But that one fee includes air transport between camps, three wonderfully hot meals (including fresh vegetables with dinner), bottled water, cold beer and distilled spirits, guides, toilet paper, hot water for bathing and on occasion, mail. The tiny Cessnas shuttle supplies and fresh food to the camps with the military precision that made the Berlin Airlift in the 60’s famous.

For over an hour Baeti polled us through canals bounded only by reeds lofting in the breeze. “This hippo highway! The windy path are hippo; the straight path – elephant.” For a Muslim, his observation sounded oddly Buddhist to me.

We approached a tiny island in the middle of what could only be described as a swamp. I immediately recognized it as a swamp when I saw an especially large crocodile lurking nearby. Before we pulled into camp, I heard Baeti squawk something into a walkie-talkie. When we arrived a few minutes later, Miss Oduetse greeted us with hot tea, cookies and a warm “Jumela!”

If Africa has a face, I am certain it would be hers. She had a broad smile and flawless, radiant skin. She cooked over a campfire as if it was a Subzero. She even boiled hot water for a shower after dinner. There’s camping and then there’s camping. I chose the latter.

As the sun fell over the shoulder of the earth, the hippos began to speak in the grunts and snorts that fill an untamed world. “Not to leave your tent tonight!” Baeti said as if it was both a question and a statement. He continued, always laughing as if the 2,000 pound beasts were the neighbor’s stray chickens, “If possible because hippos coming close to camp when eating.” That night they did. I didn’t.

The following morning I unzipped the door to the tent and saw that most of the reeds and grass near the rear of the tent was gone. I remembered hearing a bunch of snorting and chortling and ripping going on late last night. With the hippos so close, I guessed my snoring hadn’t been confused with some kind of hippo love chant. You never know about these things. Its Africa; not the zoo.

There was at least one subject of which I had no knowledge but about which Baeti apparently held a PhD: dung.  Baeti knew his shit. He knew stuff like zebra crap was rectangular. And warthog pellets were triangular. On one of our walks, Baeti picked up a handful of dried droppings the size of small, wooden beads. “Yays,” he said, pronouncing, “yes” as if it was “yay” with an “s” attached. “This female giraffe,” he declared while rolling several pieces in his hand. “Huh?” I thought to myself. Can you really tell an animal’s sex from a pile of scat?

The answer. “Has point here,” Baeti said as he held the tiny droppings up to my face so I could see the pointy part. “This one from male – is round on both side,” holding it closer to my face than I ever considered putting animal crap before. He smiled. I stepped back from the crap.

Here in swampy Xigera, the insects supported a density of birdlife that you cannot imagine existed in this part, let alone any part, of the world. And their names are as beautiful and exotic and dreamy as the colors of their feathers. The monochromatic Kalahari I flew over yesterday was another, but not so distant, reality.

I confess I skipped ornithology in college. But in an effort to sound intelligent, I picked up the camp’s copy Sasol’s Birds of Southern Africa. Here goes. I saw such rare and splendorous birds like the Senegal Coucal, the Malachite Kingfisher, the African Darter, the Reed Cormorant, and my personal favorite, the Lilac Breasted Roller. I’ll never forget the size of the Fisher Eagle we saw perched in a tree as we polled our way back to camp. It was so large it made our Cessna seem even smaller in comparison than it already was. With so many birds around Xigera Camp, each guest is given a printed checklist that names over 250 species of feathered friends for reference.

Several days later I departed for other camps further north with a lingering feeling that I had not spent enough time at Xigera. I had spent enough money. And if I had to fashion a slogan for this beautiful tented safari camp on my private little island in the Kalahari desert, it would be: “Canoe the Kalahari Until the Money Runs Out!” Even when you have leave then, it will feel way too soon.