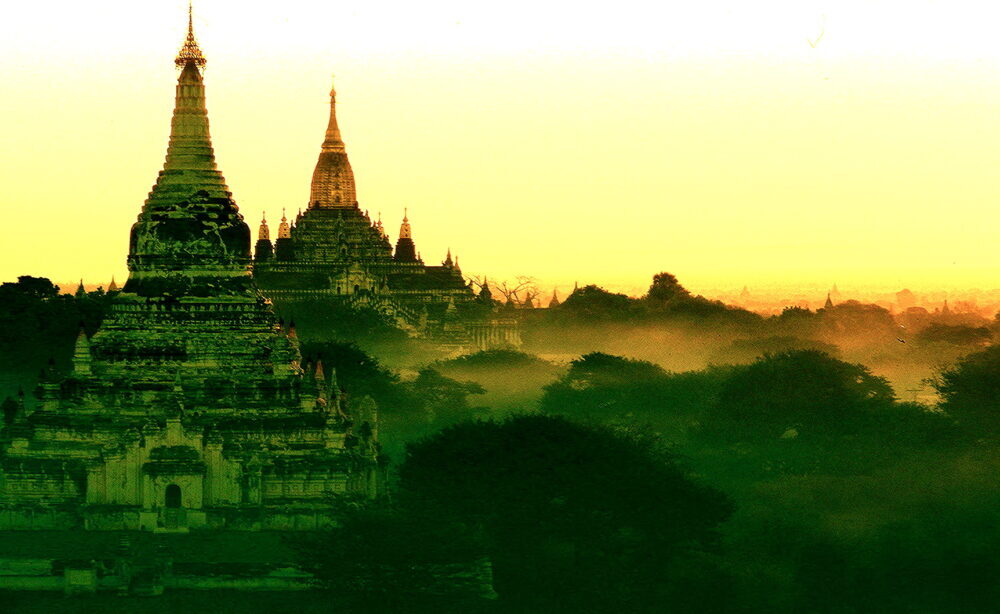 Myanmar (fka Burma) is the Land of Four Million Pagodas

I woke up in Rangoon on my birthday.  I had promised myself some time
ago that I was going to be here for just this occasion.  At my age,
birthdays have become private affairs.  Although I have no problem in
joining in on the revelry to celebrate someone else’s birthday, I have gone to
great lengths to avoid celebrating my own.  So once a year, I need a place
to hideout for a while.  This time I passed anonymously into the Year of
the Horse in the arms of distant, mysterious, exotic Rangoon.

​I had come to the realization that at my age, I tended to like things that were
at least as old as I was.  The older things were, the less old I
felt.  Some years ago, I had read about the thousand year-old
archaeological zone of Bagan in central Burma (nka Myanmar) in a National
Geographic Magazine.  Not only did this meet my age criteria but also I
would have Rangoon as a present.  So off I went.

The glory days for Rangoon may be behind it. The year round heat and pestering
humidity has thrown a veil of mildew across every building in the city.
It looks more like the decadence of Venice without the romance of the
canals.  This was just one obvious consequence of the abdication of
control by the British Crown since 1937.  But even in its state of decay,
there is a pervasive charm.

It is impossible not to be enchanted by Rangoon.  Burmese men, preoccupied in
their conversations, constantly tie and retie their longyis (sarongs)
as if it were a national past time.  Two young ladies sitting at a card
table manage a long line of customers waiting patiently to exchange money for
use of their telephone.  Crowds of people trying to cross the chaotic
streets jammed with vehicles perform a ballet to the music of car horns as
Burmese drivers prefer honking to braking.  And lights flicker incessantly
as instantaneous and unpredictable power outages punctuate the rhythm of the
day.

And where else but in Rangoon can you buy luck?  Merchants peddle good fortune near
the Buddhist shrine Sule Pagoda.   For 100 Kyats (pronounced
“chats”) bird catchers will let you release a sparrow into the Myanmar skies to
insure good luck.  Instead of blowing out candles on a cake, I forked over
14 cents and let one fly.

I have always loved the name of my birthday city.  “Rangoon.”  Actually, it
is now called “Yangon.”  But telling people you spent your birthday in
“Rangoon” has a sexy, turn-of-the-century, British colonial ring to it.
Substitute “Yangon” in the same sentence and it sounds as if you went to a
Chinese restaurant.  I am not alone in this feeling as many of the Burmese
refuse to call their home by any other name than the one I prefer.

The British could only have been stunned by the imagination and commitment of the
Burmese Buddhists.  Consider praying with monks in the heart of Rangoon at
the Shwedagon Pagoda.  You circle what may very well be
the largest gold dome on earth.  The central dome vaults 300 feet skyward
and is covered with 8,688 solid gold slabs.  The top is shrouded by a
solid gold seinbu, which resembles an umbrella and is made
up of a mosaic of 5,448 diamonds and 2,317 rubies and sapphires at its tip.
At night, a glow hangs over the city as spotlights send refracted beams
of yellowish illumination into the sky.  In the shadow of hundreds of
smaller spires encircling it, I thought of the candles on the cake I
wasn’t having and wished silently that I didn’t have to leave for Bagan the
following morning.

In the early hours, my taxi careened through nearly empty streets.  As we pulled
curbside at a nondescript building, the headlights exposed a mob of
people.  There were men in uniform.  Some carried guns.  Others
just milled about in no apparent order.  It was a mass of people pushing
and shoving and shouting words of a language I could not understand.
Somewhere on the other side of this apparent domestic disturbance was my petite
airplane waiting to take me to the interior.

As I threaded my way through the crowd it felt like being in the middle of a train
station, a bus station and a car wreck all in one.  Even though there were
more people inside, at least they were all in one line or another.  I
immediately secured a place in a column that snaked toward a counter with an
“Air Mandalay” sign posted over it.  I was not going anywhere fast as
there were queues of equal or greater lengths for Immigration, Customs and
Security.  I expected to have another birthday just waiting in line.

​The boarding area, which was already jammed with too many people, had barely enough
seats for half the number of persons waiting around.  I stood for a while
and then was thankful for the luck I bought at the Sule Pagoda.
It wasn’t much but it was a seat.

​As my eyes wandered about, I spotted a flight board in the distance.  I read
the brief list of pending departures…twice.  I was particularly concerned
that my flight was not listed.  In fact,
the name of my airline wasn’t posted anywhere.  I
saw “Yangon Airways.”  And “Myanmar Airways.”  But no “Air
Mandalay.”When you are in a foreign country, especially when you don’t
understand the language, your insecurity causes you to doubt yourself in ways
you would never do otherwise; “When I crossed the international dateline, did I
forget to change the date so now I am one day late?”  Or “Did I reset my
watch to the right hour?”  Or “Is that announcement saying my flight is
canceled?”

​Finally I walked over to an official looking guy in uniform who didn’t have a gun and
said; “Excuse me but I don’t see my flight listed on that board over
there.”  I remember him peering in the direction of my finger and then
turning toward me.  In the sincerest tone of voice you have ever heard, he
offered; “But Sir, it is a small board.”

​And that it was.

​I didn’t respond.  I just went back to my seat to contemplate my recent
humiliation as porters ran by with luggage carts, crates of vegetables, a
tricycle, an igloo playmate, a bag of golf clubs, and what looked to be car
parts.  I sat quietly resolved to refrain from asking any more questions.

​A short time later a young man in uniform walked by carrying a little placard
with two tiny, brass bells attached to the lower right and left hand
corners.  He was proof that in a poor country like Burma, every task is
someone’s job.  The board he carried had a flight name and number written
on it.  As he wound through the congregation, he repeated its
contents.  The bells clinked like champagne glasses at a dinner party as
he made his way.  The repetition of his voice resounded like a Buddhist
mantra “401, 401, 401, 401.”  Later it became “807, 807, 807, 807.”
And always a delicate clink, clink, clink could be heard in the background.

​As the hatch to my twin-engine plane closed with a dull ‘thud’, I began to realize
how quickly time was moving forward.  I had always dreamed of spending a
birthday in Rangoon and now it had come.  The engines coughed themselves
into a spinning blur as we turned for the runway.  I thought of the New
Year and the adventures ahead of me.  I also wondered if this country
required maintenance of their planes regularly or only after one of them fell
out of the sky.

​I don’t normally peer through other people’s windows.  But this time, I
couldn’t help myself.  As we banked slightly left on the approach,
thousands of domes and spires of Buddhist temples, pagodas, stupas,
monasteries, and other religious monuments filled the entire horizon.
They stretched from the Chin Mountains to the west to what appeared to be the
ends of the earth.  Tibet may lay claim as the soul of the Buddhist
world.  But Bagan, on the plains of central Myanmar, may very well be its heart.

Once the capital of the First Burmese Empire, 800 years ago Bagan fell into the hands of
the invading army of Emperor Kublai Khan.  He and his soldiers trudged
through nearly 13,000 Buddhist structures wedged onto and near the banks of the Ayeyarwady River.
You can imagine their faces as they gaped at the splendorous result of 300
years of religious construction.  The nearly 3,000 structures that remain
standing only whisper what the image of spires into an endless horizon must
have looked like.

​The Burmese have worked out a kind of balance between reverence and need.  You
cannot, after all, live on the words of prayers alone.  Thus, constrained
by the scattered ruins and collapsing foundations, fields planted with cotton,
beans, and other vegetables take on the hapless shapes of trapezoids,
pentagrams, and rectangles.  Cattle dung and goat droppings attest to the
aimless meanderings of farm animals between the stupas and
temples and decaying monasteries.  The drawn shadows cast upon the soil by
the domes and spires at the days end, reach out like the long fingers of Buddha
to bless those who toiled under the merciless and dusty heat of the day.

Bagan wakes up slowly.  Before there is enough light to see the thousands of
spires piercing the acacia umbrella, there is a night sky beset with
stars.  The same one whose constellations may have encouraged King
Anawratha in the year 1,000 to initiate a plan of religious
construction that would last for three centuries.  While the Normans were
relishing their conquest of England in 1044, the First Burmese Empire was
turning Buddhist.  By the end of the 13th century, so
resplendent was Bagan that it was known as the “City of Four Million Pagodas.”

At high noon, the heat is enough to beat the perception out of you.  Unmarked dirt
paths cross each other randomly in open fields and in thickets.  It is a
Buddhist lesson.  Choose wisely; the path you take may not lead you to
where you wish to go.

In Moenhatkone village south of Bagan, life continues as it has always notwithstanding an
ever-changing array of conquerors, rebel forces and governments.  Women
transport exaggerated loads of wood, vegetables, and rice balanced upon their
heads.  Bullock carts drag inconceivably heavy barrels of water from the
central well to thatch-roofed homes oftentimes located several kilometers
away.  Young boys and girls ride their bicycles to and from school.
Women stroll about in clothing the colors of which could only have been created
by a Crayola scientist gone mad.

Then a woman’s scream breaks into the parched, dry air filled with dust,
birdcalls and barking dogs.  I ran over with one of the guides
to see what’s going on.  Several men stood over a pile of thatch being
used to replace a roof.  They beat repeatedly at the mound leaves with
wooden poles.  A viper slithers out heading toward the barefooted
villagers.  A single bite means certain death.  On lookers and
children run in every direction.

​A woman grabs one of the kids and shrieks again in words which must have meant “There
it is!  Kill it!” or worse.  A man clubs it and then lifts the
lifeless body draped over his stick to assure everyone it is safe again.
We leave shaking our heads, happy that all ended well.

​I think I will remember this Birthday for a long time.
Rangoon made it an event.  Its opulence.  It’s romance.  Its
reverence.  But the villages on the central plains of Myanmar reminded me
that living through each day was cause enough for celebration.