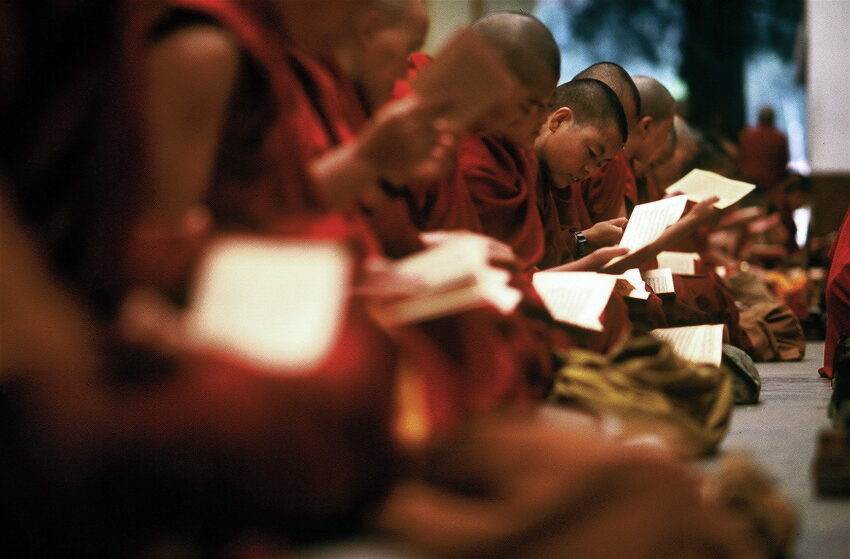 Life in a Tibetan Buddhist Monastery

Kushinagar in Eastern Uttar Pradesh, India, is as remote as it is small.  It is not a tourist destination.  It has no airport.  It does not even have a train station, which is saying something in a country that boasts one of the world’s most extensive railway systems. At other times in its history, it has been known as Kushawati and Kushinara.  Regardless of its name, it has been the end point for Buddhist pilgrims since before the 5th Century A.D.  The remnants of his cremation stupa marks the location of Buddha’s last breath.  This is the reason that Kushinagar exists at all.

Buried in over one thousand pages of information in my guide book on India was a sentence which suggested that for a donation, you may stay overnight in the Tibetan Monastery built there.  I knew then I was headed there to try my hand at living on monk time.

From Delhi, the nearest airport to Kushinagar is in Varanasi, the holiest of the seven Hindu holy cities.  After a few days exploring the wondrous Ganges river from the banks of this ancient place, I hired a car and driver and headed north along the winding Indian roadways.  It took seven long hours or so of dodging trucks, buses, an elephant or two and a slew of pedestrians, before we arrived at the monastery.  But this was not what I had expected.  This was far from the romanticized, eastern, monastic life.  It was not the grand house of the holy with its huge, dark halls filled with rows of meditating monks draped in saffron robes quietly shifting their feet.

Functionality had produced a building with the architectural flare of a Quonset hut.  The faded, mustard colored walls had not been able to withstand the effects of poor construction.  Flaking, discoloration and cracks made it appear years older than it really was.  It was an outpost of grassroots Buddhism maintained by humble believers.

My room defined the term ‘cubicle.’ The small, roughly square room had a wooden platform on which a thin, futon mattress rested.  Over it hung a mosquito net. There was also a stool, a tiny table, a candle and a box of matches. Contemplation seemed to be the only diversion. And yet it felt comfortable.  The unscreened windows let in the breeze and the sounds of birds. The flaked paint on the walls softened the hardness of the concrete. And the light encouraged napping.

In the late afternoon, one of the monks came to my room and introduced himself as ‘Tenzin.’  As we raised our hands to ours chins with heads bowed , we exchanged Namastes at the door. He stood with a small pot of tea in hand and I asked him to please share a cup with me and talk.  As I pulled the stool over for him, I commented that ‘Tenzin’ must be a common name because ‘Tenzing Norgay’ was Sir Edmund Hillary’s sherpa in Everests’ first ascent in 1953.  Tenzin explained “His Holiness, [the Dalai Lama] first name ‘Tenzin’ and he give all [of his disciples] his name.”  He smiled broadly.  “Only one problem,” he says, “my name Tenzin Kalsang B.”  I took the bait.  What does the “B” stand for?

After a pause, he related that for most of the year, he lived at Namgyal Monastery in Dharamsala, the Dalai Lama’s private residence.  When he first joined the monastery, he added ‘Tenzin’ to his own name.  Some time later it was learned that there was a monk called ‘Tenzin Kalsang’ already living there.  The solution was as simple as it was practical.  His Holiness suggested that one monk would be known as ‘Tenzin Kalsang A’ and the other ‘B.’

“Funny, yes?” he asked.  Already laughing, I shook my head and laughed with him.

I tried for my own joke and made a comment that he looked familiar.  But I was quick to say that since all Tibetan monks cut their hair and wear the same style clothes, I could easily have been mistaken.  Tenzin Kalsang B’s face beamed as he blurted out “Maybe you see me in movie Kundun?”  I stared blankly while he told me how forty-two monks from Namgyal Monastery were flown to Morocco where much of the movie was filmed.  “We arrive and find 200 or 300 Tibetans there.  Sooo funny!  We act like we in Tibet!”  His contagious good humor had both of us laughing again.

He and his family are from Llasha, Tibet.  Tenzin Kalsang B left his mother and father, along with one brother and two sisters at age 11 to join the monastery.  Now 25 years old, he has not seen or talked to his family in over 14 years.  And yet he speaks happily of his monastic existence, although he laments their absence very much.  Writing when he can, he hopes to see them one day.

“I really want see them but I don’t get chance!  Chinese Embassy only issue permit if you say ‘Tibet part of China.’  This very difficult to say.”  With that understatement, Tenzin Kalsang B highlighted the tragic political struggle between China and Tibet.  Neither His Holiness nor any of his disciples would ever offer such a concession.  In fact, thousands have died for not doing so.  Instead, the Dalai Lama’s government in exile in Dharamsala, India awaits pressure by the world community to force China to recognize Tibet as a sovereign nation.  Until that day, millions of Tibetans have fled to Nepal, India and Bangladesh awaiting their independence.

Devoted to a life of self sacrifice, Tenzin Kalsang B has never regretted his choice.  In fact, it is a choice he defends happily.  Buddhism does not correspond with the traditional definition of religion.  It does not center on a god, but instead, emphasizes a philosophy of life and a moral code.  Through Tenzin Kalsang B’s commitment as well as the combined devotion of others like him, Buddhists believe that their collective effort will be sufficient to embrace all of human kind and deliver it to nirvana.

Not all boys who ask to join a monastery are accepted.  Even more give up as the rigors of years of study and prayer become too much.  To qualify, the boys are tested on their ability to learn and memorize long texts given to them over several months’ time.  Only those that can recite to the satisfaction of the examiners are allowed to enter.

Once accepted, each monk studies 13 philosophy classes, one per year.  At the conclusion of each year, Tenzin Kalsang B, as with all other monks in study, sits for a two-day written and oral examination.

The struggle for enlightenment has left many behind.  If you do not pass the examination, you repeat the year.  Many have given up.  “When I think it hard, I remember all my eating, all my wearing, come from my Monastery.  They my second family so I want work hard for them.”  Then, with a reserved measure of pride, he told me that two years ago, he was first in his class in the written examination.  For that distinction, he received a purse of 25 Rupees (55 cents) and a small book.

Tenzin Kalsang B became a monk foremost for his family.  It brings honor to a Tibetan household to have such a dedicated and intelligent son.  He also admitted that he enjoyed the simplicity of his life.  Having no concern for money or family or employment, his focus was primarily on the teachings of His Holiness.

While he spoke, my eyes wandered out into the courtyard.  The old iron handle of the well pump hung in the air like a symbol of his life.  But Tenzin Kalsang B did not see this place as one filled with isolation, sacrifice and hardship.  It was purely a matter of perspective.  “This what a monk can do” brought me back, “when I pray, I pray for all people.”  This was what his life meant.

We sat for a moment in the fading light of this hot summer’s day.  His mother and father and one sister are still in Llasha.  His brother is studying somewhere in China.  After a moment he offered “One day, I see my sister in Madison.  It near Chicago, yes?”  He grinned.  “Yes,” I said with a smile, “Madison, Wisconsin is near Chicago.”  Her name followed after a very long pause “Shong Kyi.  I hope I see her some day.”  Just then the soft pink light of sunset mixed with the sadness in my room.         In the presence of this man of seeming infinite goodness, I may have accidentally been given my first lesson toward enlightenment.  And it came as room service.